Situated on the Connecticut Shoreline between East Haven and Guilford, and overlooking Long Island Sound, sits Branford, Connecticut, a town with about 28,000 residents and plenty going for it.

Branford enjoys a convenient location, as it's only 85 miles from New York City, 140 miles from Boston, and 45 miles from Hartford, making it possible to work in larger cities while living in paradise. Yale University is 12 minutes away, providing even more job opportunities.

The town provides coastal living while allowing residents to work in the city, making it one of the most desirable places to buy real estate in Coastal Connecticut.

Branford is pretty spread out and has multiple neighborhoods, with each offering something different.

Branford Center is the downtown area, and home to most of the town's shops and restaurants, particularly along Main Street. This area is also where you'll find Branford Town Green, which is a historic meeting place and the unofficial center of town. There are historic homes throughout the area, as well.

The western part of town is called Branford Hills, which is a mix of commercial properties, restaurants, and homes. The Connecticut Turnpike runs right through this section, so it gets some traffic, but it is also home to Lake Saltonstall and its surrounding forest.

Short Beach is just south of Branford Hills on the western edge of town and extends down to Long Island Sound. The neighborhood is mainly residential and home to the public Johnson's Beach and some other small waterfront areas. There is a nature preserve here, too.

Indian Neck is a peninsula that overlooks Branford Harbor. Once a popular tourist destination, Indian Neck has become mostly residential over the year. You'll find an abundance of marinas and restaurants in Indian Neck, as well as a public beach.

Pine Orchard is another coastal neighborhood that is mostly residential and features some oceanfront properties. The community has a golf course, a pond, and a yacht club, as well, making it highly desirable for new residents.

Stony Creek is the furthest east you can go in Branford and is set away from the rest of town, making it feel like a separate community. The oceanfront area in Stony Creek has a museum, a library, restaurants, stores, a theater, and even a ferry service to the nearby Thimble Islands. This neighborhood extends north, as well, into an industrial park.

The history of Branford, CT

The area that is now Branford, Connecticut, was originally inhabited by the Mattabesech tribe and called Totoket. Europeans purchased the land in 1638 and established the town of Branford in 1644. Early documents show that the region was initially named Brentford after a village in England, but it was later shortened to Branford.

The first shoreline community in Branford was Stony Creek. Other areas, like Pine Orchard and Indian Neck, had residents but weren't permanently settled until the mid-1800s. Around that time, Branford became known as a resort community, particularly in the Indian Neck and Stony Creek neighborhoods.

The town has since evolved into a suburban center, rather than a resort community, although it still has the same magnificent beaches and water access for locals.

Things to do in Branford, Connecticut

There's plenty to do and see in Branford, starting with the town's historic districts. These districts include Branford Center, Branford Point, Canoe Brook, Route 146, and Stony-Creek Thimble Island, with each having its own unique history. Some of these districts have hundreds of historic homes and buildings in them, so you'll never run out of things to explore.

If you're looking to get outdoors, you can hike or fish at Lake Saltonstall or take a walk on the Shoreline Greenway Trail. There are also public facilities like Branford Point Beach, Bayview Park, Foote Park, Stony Creek Beach, and Youngs Pond, all of which are free to use.

The town has a handful of marinas where the river empties into Branford Harbor, and you'll also find breweries both downtown and in Stony Creek.

Buy a home in Branford

When you purchase real estate in Branford, Connecticut, you’re entering a town that has access to anything you could ever want. Whether you want to spend a day in the bustle of New York City, lounging on a beach, or hiking through a deserted forest, you’re never far from your ideal activity.

Page Taft knows exactly what Branford has to offer and can help you decide on your next home. Contact us with any questions you have about buying a home in Branford, CT, today.

Homes For Sale In Branford 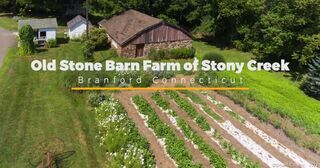